Intel Insights: How to Secure PowerShell

PowerShell is a task-based command-line shell or user interface serving as Microsoft’s configuration management framework. This interface allows for task automation that manages operating systems and processes. Cyber threat actors (CTAs) often leverage PowerShell once they gain access to a system. CTAs use PowerShell because it is a legitimate administrative tool that allows them access to the command line, gaining access to stored data as well as access to both local and remote systems across the network. This access allows them to hide malicious commands and run them across the network or locally, as if they were put in place by the system administrator, helping it evade security scans. For example, Kovter, a fileless click fraud malware, hides its malicious modules entirely in the registry. These modules are then injected into the PowerShell process when the infected system restarts, prompting the click fraud process to begin.

In most cases, standard users do not require PowerShell to perform their everyday functions. Only network administrators and IT professionals that need PowerShell for legitimate work tasks should have access. Giving standard users access to PowerShell creates unnecessary risk for your organization.

If PowerShell is not needed, prevent its execution on systems after performing appropriate testing to assess the impact to the environment. This may not always be possible since this is a legitimate tool and has administrative functions. Restrict PowerShell in these cases through execution policy to administrators and execute signed scripts only. Depending on environmental configurations there may be ways to bypass the execution policy. Lastly, to prevent the use of PowerShell for remote execution disable, or at the very least restrict, Windows Remote Management Service.

The MS-ISAC recommends organizations use the CIS Benchmarks and CIS Build Kits, which are a part of CIS SecureSuite. Please see below for detailed steps on disabling PowerShell.

To Turn on Script Execution in Group Policy settings

The Turn on Script Execution policy settings are as follows: 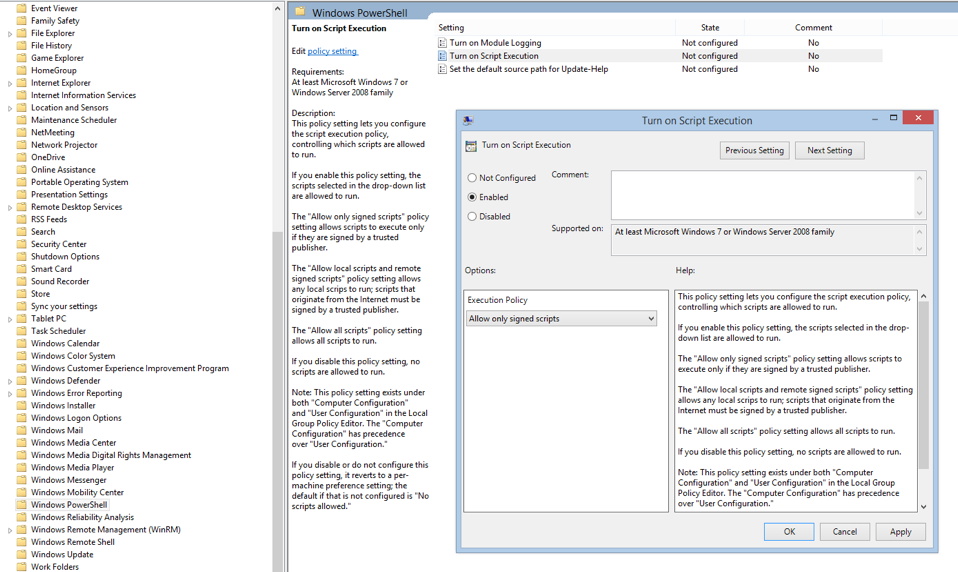 The MS-ISAC is the focal point for cyber threat prevention, protection, response, and recovery for the nation’s state, local, tribal, and territorial (SLTT) governments. More information about this topic, as well as 24×7 cybersecurity assistance is available at 866-787-4722, [email protected]. The MS-ISAC is interested in your comments – an anonymous feedback survey is available.