Top 10 Malware composition was consistent through July 2020, with the exception of Shlayer, Bancos, and TrickBot. The Top 10 Malware variants composed 60% of Total Malware activity in July, up from 36% in June. The significant jump from the previous month is due to the rapid increase in Shlayer activity, which has not been seen in the Top 10 Malware since February 2019. This is likely due to recent structural upgrades to Shlayer, giving it dropper and downloader capabilities in conjunction with its existent adware functionality. Consistent with previous months, it is highly likely that ZeuS will continue to make up a significant portion of the Top 10 Malware due to widespread use of its source code. 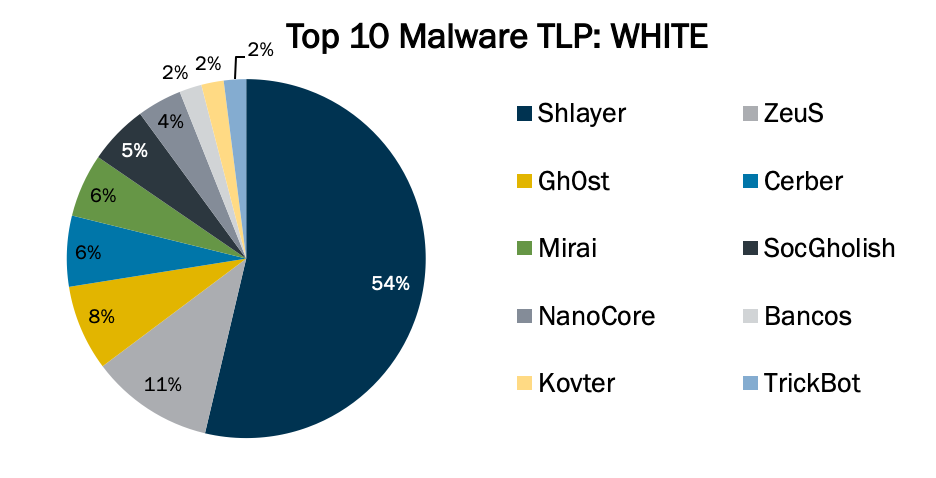 In July 2020, malvertisement accounted for the greatest number of alerts. Malvertisement’s increase to the top initial infection vector is due to the return of Shlayer. Activity levels for all vectors, except malspam and network, increased. MS-ISAC observed one new malware variant, Bancos. With the drastic increase in Shlayer infections, it is likely that malvertisement will remain the primary infection vector as the Shlayer campaign pans out.

Malspam – Unsolicited emails, which either direct users to malicious web sites or trick users into downloading or opening malware. Top 10 Malware using this technique include Bancos, Cerber, Kovter, and NanoCore.

Malvertisement – Malware introduced through malicious advertisements. Currently, SocGholish and Shlayer are the only malware using this technique.