Ryuk is the most prevalent ransomware variant in the state, local, tribal, and territorial (SLTT) government sector. It is the number one reported variant of 2019, accounting for approximately a quarter of incidents reported to the MS-ISAC. Ryuk and ransomware infections in general continue to increase in tandem with their overall impact and monetary demands. Furthermore, Ryuk’s ability to delete shadow copies and backups makes a Ryuk infection extremely costly and almost impossible to remediate. For instance, an SLTT government paid approximately $600,000 after Ryuk encrypted nearly all the files on their network.

Ryuk uses an advanced three tier encryption model to encrypt files until a ransom is paid. It is often dropped on a system by other malware (e.g., TrickBot) or delivered by cyber threat actors (CTAs) after compromising a system via Remote Desktop Services. Once on a system, CTAs deploy Ryuk throughout the network using PowerShell, PsExec, or Group Policy, with the aim of infecting as many systems as possible. The number of infected systems depends upon how the malware is deployed as well as the CTAs’ access and privileges. This may be a local subnet, the list of computers in active directory, or the entire organization depending on the variability and process specific nature of spreading the malware. Once the malware is pushed out to the network, it targets backups and begins the encryption process.

Throughout 2019, the MS-ISAC observed an increase in Emotet or TrickBot infections leading to a Ryuk infection. For example, the MS-ISAC assisted in an incident where TrickBot disabled the organization’s endpoint antivirus application and spread throughout the network, infecting hundreds of endpoints and multiple servers. Since TrickBot is a banking trojan, it likely harvested and exfiltrated financial and other sensitive information prior to deploying Ryuk. Once Ryuk is deployed network-wide, the CTAs encrypted the organization’s data and backups, and left ransom notes on the machines.

Previously, Ryuk ransom notes contained a message and a ransom amount, but have since evolved over time. Throughout most of 2019, the ransom note did not list a ransom amount and only contained a message and email address (see Figure 1). However, current Ryuk ransom notes are more simplistic and only include an email address, the ransomware’s name, and the statement “balance of shadow universe” (See Figure 2). The CTAs demand payment via Bitcoin cryptocurrency and direct victims to deposit the ransom into specific Bitcoin wallets. In the SLTT government sector, the ransom demand is typically between $100,000-$600,000, which as of
12/19/19 is approximately 14-84 Bitcoins. Notably the ransom demand appears to be determined by an organization’s assessed ability to pay and the sensitivity of the data affected. It is highly likely the CTAs account for characteristics like industry, solvency, subscription to cyber insurance, and network saturation when calculating ransom demands. Furthermore, the CTAs have been known to negotiate with victims and adjust the initial ransom amount. 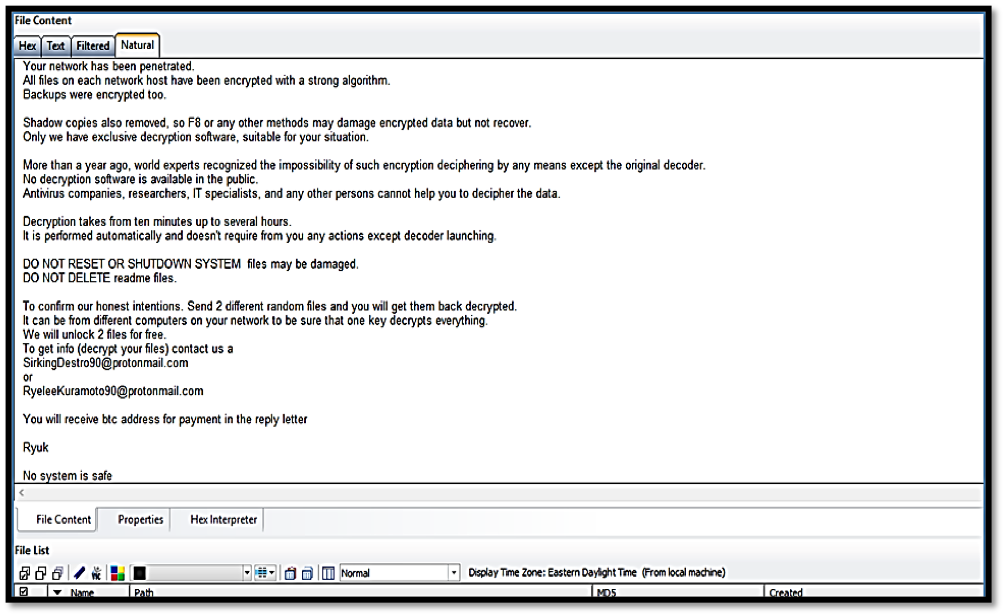 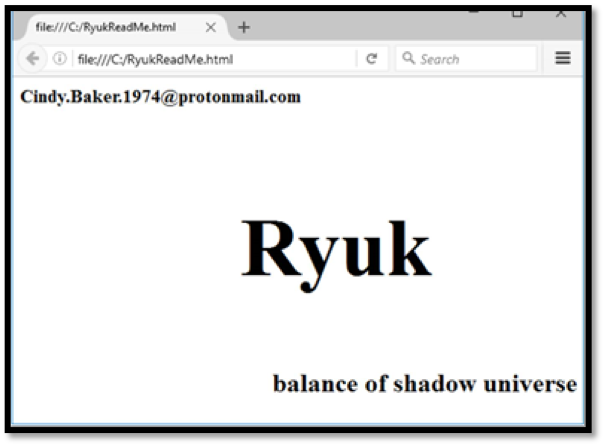 Ryuk’s main infection method is to be dropped on a system by other malware. It is difficult to recover and analyze the dropper because the main payload deletes the dropper after its initial execution. The dropper identifies a folder path to create a file for the payload. For older Windows systems, like Windows XP, the folder path would look like “C:\Documents and Settings\Default\User\”; whereas for Vista or newer systems, the path would look like “C:\Users\Public”. The file will have a five-letter random name that is usually generated by the srand1 and GetTickCount2 functions. If the file creation fails, the dropper will then try to write into its own directory. The dropper contains 32 and 64-bit modules of the ransomware. Once the file is created, the dropper then checks what system is currently running and writes the appropriate module (32 or 64-bit) to it.

Once executed, the main payload attempts to stop antivirus-related processes and services. It uses a preconfigured list to kill more than 40 processes and 180 services with taskkill and net stop commands. This preconfigured list includes antivirus processes, databases, backups, and document editing software. Additionally, the main payload establishes persistence in the registry and injects malicious payloads into several running processes. To increase persistence, Ryuk makes changes to the registry allowing it to run the payload every time the user logs on. To achieve this, it creates a registry value under the Run Key using the windows command line cmd.exe. Ryuk then writes a Registry Run Key named svchos to “HKEY_CURRENT_USER\SOFTWARE\Microsoft\Windows\CurrentVersion\Run” with the executable as the key’s target path. The naming of the Run Key is deliberate in order to look like the legitimate svchost process. Subsequently, Ryuk creates snapshots of all running processes via the CreateToolhelp32Snapshot(),duplicating this step to have two lists of running processes for comparison. The list of running processes are compared to csrss.exe, explorer.exe, and lsass.exe. The malware whitelists these processes to identify other running processes to inject the payload into, such as taskhost.exe. Ryuk’s anti-recovery techniques are more extensive and sophisticated than most types of ransomware, making recovery almost impossible without restoring from clean external offline backups. Ryuk’s process injection allows the malware to gain access to the volume shadow service and delete all shadow copies, including those used by third-party applications. Ryuk starts by writing its content into a remote thread to execute its code via the WriteProcessMemory3 and CreateRemoteThread4 functions. Next, the malware runs a dropped .bat file, which contains multiple uses of vssadmin.exe5. Like other ransomware variants, Ryuk uses vssadmin.exe to delete shadow copies. However, it also uses an undocumented feature that allows it to resize the shadow copies storage, enabling it to delete third-party shadow copies. To delete the third-party shadow copies, the malware changes the size of the storage via the “vssadmin resize shadowstorage” command. The malware will then resize the default shadow volume size, setting it to unbound, which grants storage use of all available disk space. Once completed, the malware will run the delete shadow command via “delete shadows /all/quiet” to remove the files based on extensions and folder locations for shadow copies, including those created by third-party applications. Furthermore, it will search for and delete multiple files that have backup-related extensions and any backups that are currently connected to the infected machine or network.

Ryuk uses RSA and AES encryption algorithms with three keys. The CTAs use a private global RSA key as their base encryption model. The second RSA key is delivered to the system via the main payload and is encrypted with the CTA’s private global RSA key. Once the malware is ready for encryption, the final key is created in their three-key encryption model. The third key is an AES key that is created for each of the victim’s files via the Win32API function CryptExportKey6. The AES keys created for the third key are then exported via CryptExportKey and encrypted using the second RSA key. Additionally, it uses the second RSA key for the HExpKey parameter7. Ryuk scans the infected systems and encrypts almost every file, directory, drive, network share, and network resource. Ryuk attempts to encrypt all mounted network drives and hosts that have Address Resolution Protocol (ARP) entries. The malware also enumerates mounted drives using= the GetLogicalDrives function and determines the drive’s type via GetDriveTypeW. As long as the drives are not CD-ROM types, the files will be encrypted. Ryuk will also use the GetIpNetTable function to find ARP entries associated with IP addresses.

While Ryuk tries to encrypt most files, there are specific files and directories that are whitelisted and left unencrypted. For example, folders with the extensions .exe, .dll, and .hrmlog, as well as folders named AhnLab, Chrome, Microsoft, Mozilla, recycle.bin, and Windows will not be encrypted as these allow the victim to access the internet (e.g., to buy cryptocurrency for the ransom demand) or to keep the host stable. Finally, once the malware is finished with the encryption process, it will create the ransom note, “RyukReadMe.txt”, placing it in every folder on the system.

SLTT governments should adhere to best practices, such as those described in the CIS Controls, which are part of CIS SecureSuite. The MS-ISAC recommends organizations adhere to the following recommendations to limit the potential compromise and impact of Ryuk ransomware.

Review any vendor accounts and their associated passwords to ensure they have been changed from their default settings.

[1] Srand function sets the starting point for generating a series of pseudorandom integers in the current thread.

[2] GetTickCount function retrieves the number of elapsed milliseconds since the system was started, up to 49.7 days.

[3] WriteProcessMemory function writes data to an area of memory in a specified process.

[4] CreateRemoteThread function creates a thread that runs in the virtual address space of another process.

[7] HExpKey, a CryptExportKey  parameter, is a handle to a cryptographic key of a destination user.

The MS-ISAC is the focal point for cyber threat prevention, protection, response, and recovery for the nation’s state, local, tribal, and territorial (SLTT) governments. More information about this topic, as well as 24×7 cybersecurity assistance is available at 866-787-4722, [email protected]. The MS-ISAC is interested in your comments – an anonymous feedback survey is available.