In May 2022, with the exception of Jupyter returning to the Top 10, the lineup remained consistent with the previous month’s malware. Jupyter, aka SolarMarker, is a highly evasive and adaptive .NET infostealer that is downloaded by leveraging SEO-poisoning. This creates watering hole sites for the purpose of deceiving unsuspecting users who visit the website and download a malicious document, often a zip or PDF file embedded with a malicious executable. The Top 10 Malware variants comprise 63% of the total malware activity in May 2022, decreasing 6% from April 2022. 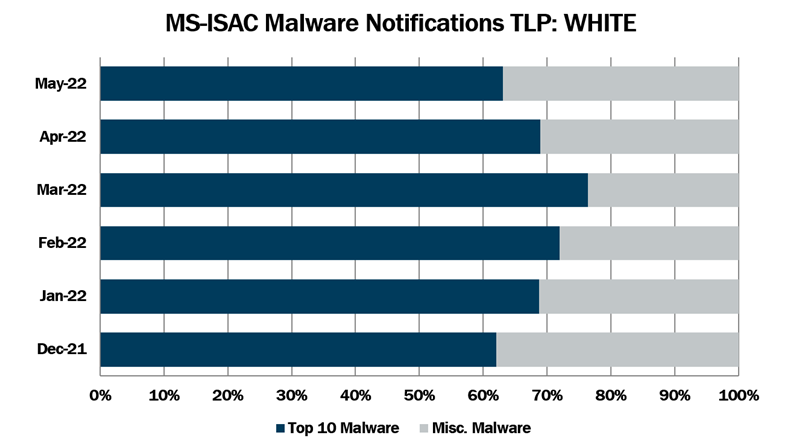 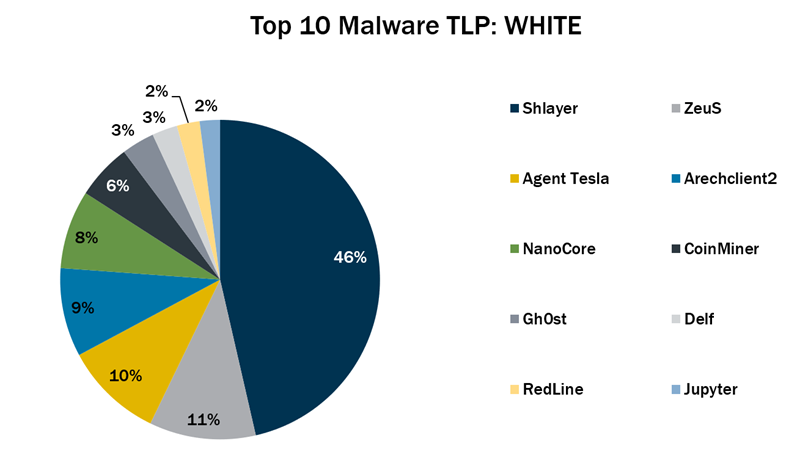 In May 2022, Malvertisement accounted for the greatest number of alerts. Malvertisement remains the top initial infection vector due to Shlayer activity. Activity levels for Malspam, Malvertisement, and Multiple decreased, while activity for Dropped increased. It is likely that Malvertisement will remain the primary infection vector as the Shlayer campaign continues. However, Shlayer activity has been decreasing month over month in 2022, with its most recent decrease of 47% from April to May. The Multiple category increases and decreases at an unpredictable rate, which makes it difficult to analyze trends. This category will likely continue to comprise a significant portion of the initial infection vectors as malware becomes more sophisticated and employs multiple methods to infect systems. Malspam consistently represents a portion of the Top 10 malware as it is one of the oldest, most reliable, primary initial infection vectors used by cyber threat actors in both this category and the Multiple category. 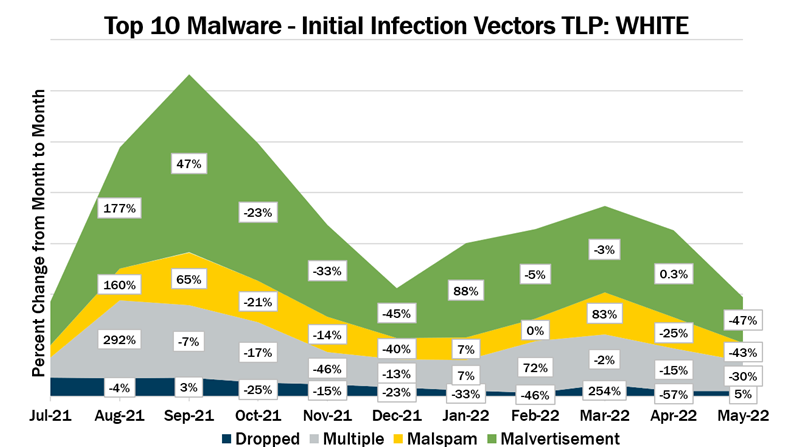 Dropped – Malware delivered by other malware already on the system, an exploit kit, infected third-party software, or manually by a cyber threat actor. Currently, Gh0st and Jupyter are using this technique.

Shlayer is a downloader and dropper for MacOS malware. It is primarily distributed through malicious websites, hijacked domains, and malvertizing posing as a fake Adobe Flash updater. All Shlayer domains follow the same pattern <api.random_name.com>. Below are several examples of domains Shlayer uses.

ZeuS is a modular banking trojan that uses keystroke logging to compromise victim credentials when the user visits a banking website. Since the release of the ZeuS source code in 2011, many other malware variants have adopted parts of its codebase, which means that events classified as ZeuS may actually be other malware using parts of the ZeuS code.

Agent Tesla is a RAT that exfiltrate credentials, logs keystrokes, and captures screenshots from an infected computer.

Arechclient2, aka SectopRAT, is a .NET RAT with numerous capabilities including multiple stealth functions. Arechclient2 can profile victim systems, steal information such as browser and crypto-wallet data, and launch a hidden secondary desktop to control browser sessions. Additionally, it has several anti-VM and anti-emulator capabilities.

CoinMiner is a cryptocurrency miner family that typically uses Windows Management Instrumentation (WMI) and EternalBlue to spread across a network. Additionally, it typically uses the WMI Standard Event Consumer scripting to execute scripts for persistence. However, due to multiple variants of this malware, capabilities may vary. CoinMiner spreads through malspam or is dropped by other malware.

Delf is a family of malware with multiple variants written in the Delphi programming language, where most are downloaders. Campaigns, targets, infection vectors, and capabilities vary based on the variant. Delf has multiple initial infection vectors, such as dropped, malspam, or unintentional downloaded from a malicious website. Some of the abilities Delf variants exhibit include backdoor or proxy functionality, stealing information, terminating antivirus applications, and mass mailing.

RedLine is an infostealer available for purchase on cyber-criminal forums. Campaigns, targets, infection vectors, and capabilities vary based on the version purchased. The malware typically targets information that can be easily monetized, such as credentials, cookies, banking information, and cryptocurrency wallet information. Additionally, the malware gathers information about the infected system such as web-browser, FTP clients, instant messengers, VPN services, and gaming clients. Furthermore, RedLine has remote functionality, allowing it to download further malicious tools or drop additional malware.

Jupyter, aka SolarMarker, is a highly evasive and adaptive .NET infostealer that is downloaded by leveraging SEO-poisoning. This creates watering hole sites for the purpose of deceiving unsuspecting users who visit the website and download a malicious document, often a zip or PDF file embedded with a malicious executable.