Top 10 Malware composition was fairly consistent through May 2020, with the exception of Quasar, SocGholish, and Ursnif. Overall, the Top 10 Malware variants composed 36% of Total Malware activity in June, down from 43% in May. It is highly likely that ZeuS and Dridex will continue to make up a significant portion of the Top 10 Malware due to widespread use of ZeuS source code and the complexity of the Dridex signature sets, as well as the effectiveness of malspam in the SLTT landscape. 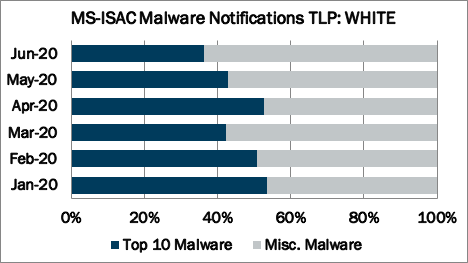 In June 2020, malspam accounted for the greatest number of alerts. Activity levels for all vectors, except dropped and Malvertisement, decreased. MS-ISAC observed two new malware variants, SocGholish and Quasar, both of which are Remote Access Trojans (RATs). Malvertisement, which remained dormant since February 2019, reemerged due to SocGholish activity. ZeuS alerts accounted for activity within the multiple infection vector. Cerber, Dridex, Kovter, NanoCore, Quasar, and Ursnif represent the malspam related infections for June 2020. Gh0st and Mirai are currently the only malware in the Top 10 whose primary initiation vector is dropped. There is no Top 10 Malware activity this month utilizing network as a primary initiation vector. There is a high likelihood that malspam will remain the primary initiation vector for the Top 10 Malware due to the continued effectiveness of this method.

Malvertisement – Malware introduced through malicious advertisements. Currently, SocGholish is the only malware to use this technique.