In December 2021, the Top 10 stayed consistent with the previous month with the exception of Cerber, RedLine, and Qakbot. Cerber and Qakbot returned to the Top 10, while RedLine made its first appearance. RedLine is an infostealer targeting information that can be easily monetized, such as credentials, cookies, banking information, and cryptocurrency wallet information. The Top 10 Malware variants comprise 62% of the total malware activity in December 2021, decreasing 7% from November 2021. The decrease in malware activity is highly likely due to the increase in employees taking vacation time due to the holidays. Shlayer and CoinMiner continue to lead the Top 10 Malware and are likely to continue their prevalence in the Top 10 Malware for the coming months. 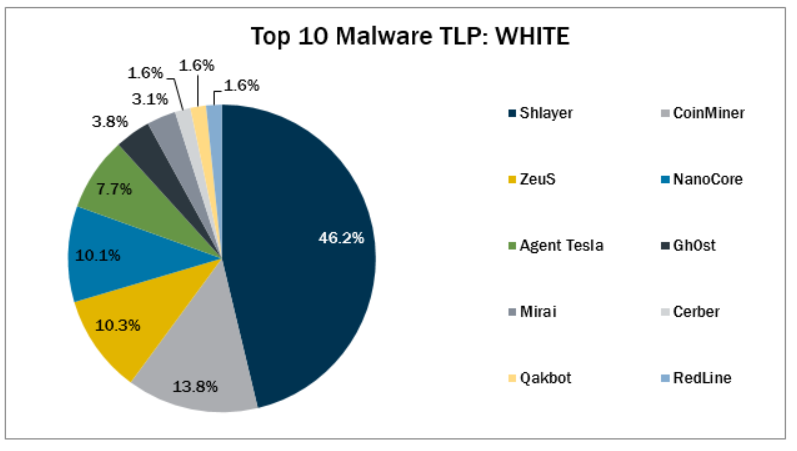 In December 2021, malvertisement accounted for the greatest number of alerts. Malvertisement continues as the top initial infection vector due to Shlayer activity. Activity levels for all initial infection vectors decreased. Shlayer and CoinMiner remain in the top two spots. The activity from these malware is primarily from the education sector. Shlayer is a downloader and dropper for MacOS malware. It is primarily distributed through malicious websites, hijacked domains, and malvertizing posing as a fake Adobe Flash updater. CoinMiner is a cryptocurrency miner that uses Windows Management Instrumentation (WMI) and EternalBlue to spread across a network. CoinMiner uses the WMI Standard Event Consumer scripting to execute scripts for persistence. CoinMiner spreads through malspam or is dropped by other malware.

Dropped – Malware delivered by other malware already on the system, an exploit kit, infected third-party software, or manually by a cyber threat actor. Gh0st, Mirai, and Qakbot the malware utilizing this technique.

Mirai is a malware botnet known to compromise Internet of Things (IoT) devices in order to conduct large-scale DDoS attacks. Mirai is dropped after an exploit has allowed the attacker to gain access to a machine.

Cerber is an evasive ransomware that is capable of encrypting files in offline mode and is known for fully renaming files and appending them with a random extension. There are currently six versions of Cerber, which evolved specifically to evade detection by machine learning algorithms. Currently, version 1 is the only version of Cerber for which a decryptor tool is available.

Qakbot is financial malware designed to target governments and businesses for financial fraud and known for its wormability on a network. Qakbot installs a keylogger to steal user credentials. It monitors network traffic, specifically traffic to online banking websites and can piggyback on a user’s active banking session by intercepting authentication tokens.

RedLine, is an infostealer available for purchase on cyber-criminal forums. Campaigns, targets, infection vectors and capabilities vary based on the version purchased. The malware typically targets information that can be easily monetized, such as credentials, cookies, banking information, and cryptocurrency wallet information. Additionally, the malware gathers information about the infected system such as web-browser, FTP clients, instant messengers, VPN services, and gaming clients. Furthermore, RedLine has remote functionality allowing it to download further malicious tools or drop additional malware.