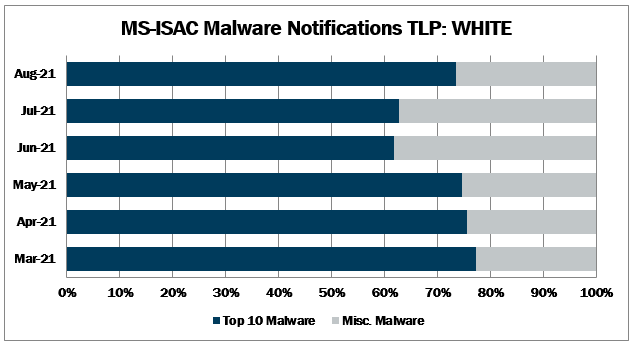 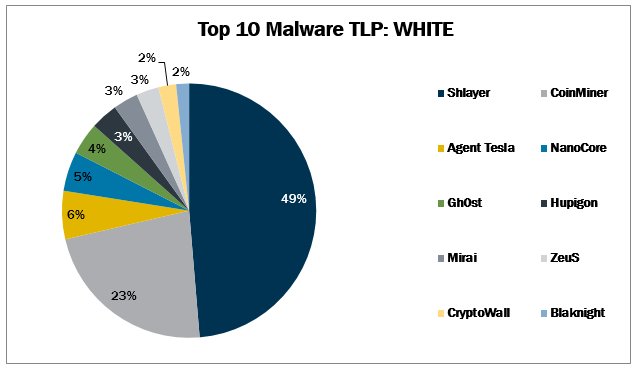 In August 2021, malvertisement accounted for the greatest number of alerts. Malvertisement continues as the top initial infection vector due to Shlayer activity. Activity levels for malspam, malvertisement, and multiple increased, while activity for dropped decreased. Shlayer activity increased 177% from the previous month, while CoinMiner increased over 300% from the previous month. The increase in activity from these malware is due to the education sector resuming activities from summer vacation. Shlayer is a downloader and dropper for MacOS malware. It is primarily distributed through malicious websites, hijacked domains, and malvertizing posing as a fake Adobe Flash updater. CoinMiner is a cryptocurrency miner that uses Windows Management Instrumentation (WMI) and EternalBlue to spread across a network. CoinMiner uses WMI Standard Event Consumer scripting to execute scripts for persistence. CoinMiner spreads through malspam or is dropped by other malware. 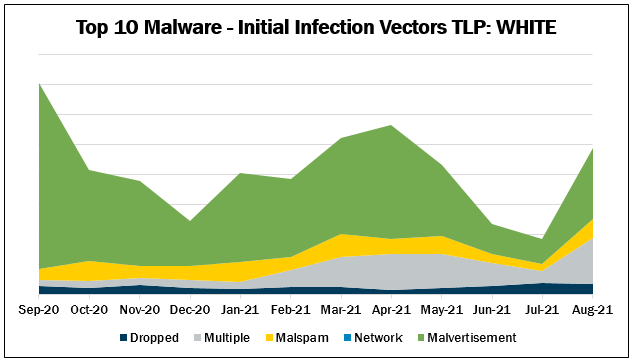 Dropped – Malware delivered by other malware already on the system, an exploit kit, infected third-party software, or manually by a cyber threat actor. Gh0st and Mirai are examples of this vector.

Malspam – Unsolicited emails, which either direct users to malicious web sites or trick users into downloading or opening malware. Top 10 Malware using this technique include Agent Tesla, Blaknight, and NanoCore.

Hupigon is a backdoor trojan that is usually dropped by other malware or is unknowingly downloaded via a malicious website. Some of this malware’s abilities include: allowing remote users to connect to the affected system and execute commands on the system, logging keystrokes, and stealing information, such as credentials.