In August 2020, we had 4 new malware enter the Top 10 with two of them being first-timers on the list, Agent Tesla and Blaknight. The Top 10 Malware variants composed 78% of Total Malware activity in August 2020, up from 60% in July. The significant jump from the previous month is due to the rapid increase in Shlayer activity, which has not entered the Top 10 Malware since February 2019. This is likely due to recent structural upgrades to Shlayer, giving it dropper and downloader capabilities in conjunction with its existent adware functionality. Additionally, due to the start of a new school year, Shlayer activity has drastically increased from the previous month. Shlayer is highly likely to continue to be at the top of the Top Ten Malware as their campaign pans out. 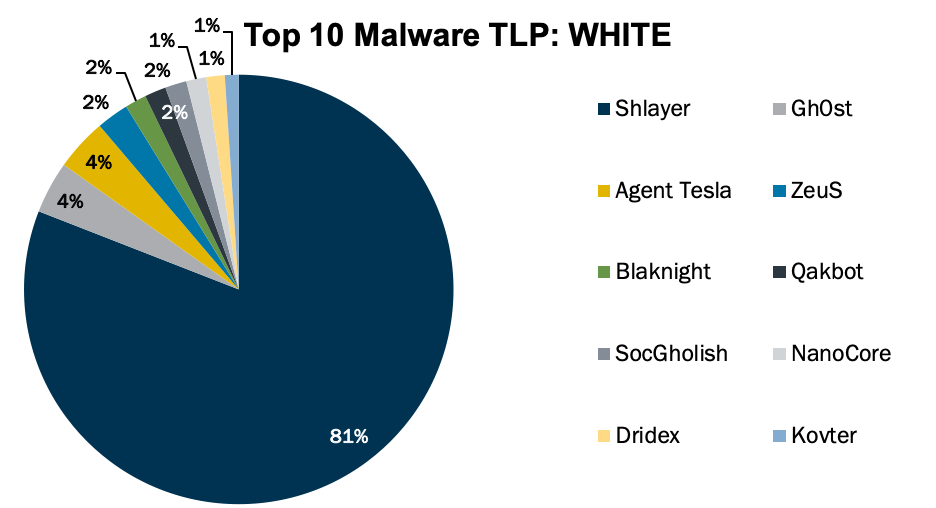 In August 2020, malvertisement accounted for the greatest number of alerts. Malvertisement continued  increase as the top initial infection vector, is due to Shlayer activity. Shlayer returned to the Top 10 Malware after new evidence resulted in it being reclassified as a Trojan Downloader, compared to an Adware Dropper. Adware Droppers are not included in the Top 10 Malware count. Activity levels for all vectors, except multiple and network, increased. MS-ISAC observed two new malware variants, Agent Tesla  and Blaknight.

Dropped – Malware delivered by other malware already on the system, an exploit kit, infected third-party software, or manually by a cyber threat actor. Currently Gh0st and Qakbot are being dropped.

Malvertisement – Malware introduced through malicious advertisements. Currently, Shlayer  and SocGholish are the only Top 10 Malware using this technique.