In April 2022, with the exception for both CryptoWall and RedLine returning to the Top 10, the lineup remained consistent with the previous month’s malware. CryptoWall is a ransomware commonly distributed through malspam with malicious ZIP attachments, Java vulnerabilities, and malicious advertisements. Upon successful infection, CryptoWall will scan the system for drive letters, network shares, and removable drives. RedLine is an infostealer targeting information that can be easily monetized, such as credentials, cookies, banking information, and cryptocurrency wallet information. The Top 10 Malware variants comprise 69% of the total malware activity in April 2022, decreasing 7% from March 2022. 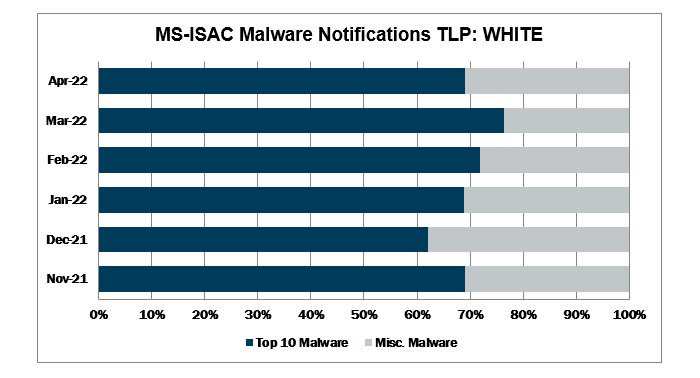 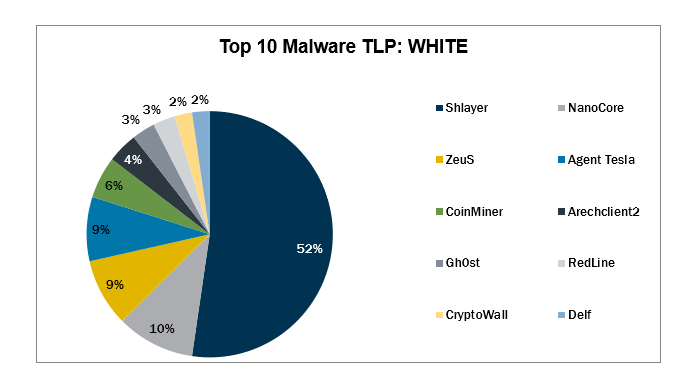 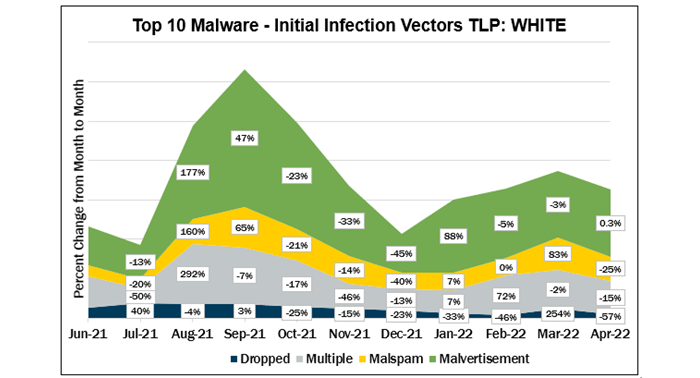 Dropped – Malware delivered by other malware already on the system, an exploit kit, infected third-party software, or manually by a cyber threat actor. Currently, only Gh0st is using this technique.

1. Shlayer is a downloader and dropper for MacOS malware. It is primarily distributed through malicious websites, hijacked domains, and malvertizing posing as a fake Adobe Flash updater. All Shlayer domains follow the same pattern <api.random_name.com>. Below area several examples of domains Shlayer uses.

2. NanoCore is a RAT spread via malspam as a malicious Excel XLS spreadsheet. As a RAT, NanoCore can accept commands to download and execute files, visit websites, and add registry keys for persistence.

3. ZeuS is a modular banking trojan which uses keystroke logging to compromise victim credentials when the user visits a banking website. Since the release of the ZeuS source code in 2011, many other malware variants have adopted parts of its codebase, which means that events classified as ZeuS may actually be other malware using parts of the ZeuS code.

4. Agent Tesla is a RAT that exfiltrate credentials, log keystrokes, and capture screenshots from an infected computer.

5. CoinMiner is a cryptocurrency miner family that typically uses Windows Management Instrumentation (WMI) and EternalBlue to spread across a network. Additionally, it typically uses the WMI Standard Event Consumer scripting to execute scripts for persistence. However, due to multiple variants of this malware, capabilities may vary. CoinMiner spreads through malspam or is dropped by other malware.

6. Arechclient2, aka SectopRAT, is a .NET RAT with numerous capabilities including multiple stealth functions. Arechclient2 can profile victim systems, steal information such as browser and crypto-wallet data, and launch a hidden secondary desktop to control browser sessions. Additionally, it has several anti-VM and anti-emulator capabilities.

7. Gh0st is a RAT used to control infected endpoints. Gh0st is dropped by other malware to create a backdoor into a device that allows an attacker to fully control the infected device.

8. RedLine, is an infostealer available for purchase on cyber-criminal forums. Campaigns, targets, infection vectors and capabilities vary based on the version purchased. The malware typically targets information that can be easily monetized, such as credentials, cookies, banking information, and cryptocurrency wallet information. Additionally, the malware gathers information about the infected system such as web-browser, FTP clients, instant messengers, VPN services, and gaming clients. Furthermore, RedLine has remote functionality allowing it to download further malicious tools or drop additional malware.

9. CryptoWall is a ransomware commonly distributed through malspam with malicious ZIP attachments, Java vulnerabilities, and malicious advertisements. Upon successful infection, CryptoWall will scan the system for drive letters, network shares, and removable drives. CryptoWall runs on both 32-bit and 64-bit systems. a PowerShell-based backdoor allowing the attacker to obtain the system’s hostname and to run commands. This backdoor communicates through a DNS tunneling channel on the compromised server.

10. Delf is a family of malware with multiple variants written in the Delphi programming language, where most are downloaders. Campaigns, targets, infection vectors and capabilities vary based on the variant. Delf has multiple initial infection vectors, such as: dropped, malspam, or unintentional downloaded from a malicious website. Some of the abilities Delf variants exhibit include: backdoor or proxy functionality, stealing information, terminating antivirus applications, and mass mailing.