Part 3 in a series on Malware

The Multi-State Information Sharing and Analysis Center’s (MS-ISAC) Cyber Threat Intelligence (CTI) team assesses it is highly likely ransomware groups will continue to steal and post victim data throughout 2021, as an added revenue generator and double extortion tactic. By threatening to publicly post confidential data, ransomware groups are placing additional pressure on victims to pay out the ransom for the promise of outright deleting or keeping stolen data confidential. Besides publicly posting data, ransomware groups sell stolen data in cybercriminal forums and dark web marketplaces for additional revenue. Data from Chainalysis shows the total amount paid by ransomware victims increased 311% in 2020, amounting to nearly $350 million worth of cryptocurrency. [1] In one high-profile example, a public university reportedly paid over $1 million in Bitcoin to recover its encrypted files and delete the stolen data. [2]

The recent trend of CTAs using data exfiltration as leverage over State, Local, Tribal, and Territorial (SLTT) victims is especially impactful to organizations housing sensitive information, such as public healthcare entities and K-12 school districts. These public sector targets remain popular because of their essential services and public sensitivity on protecting children and the ill. Thus, these organizations feel an internal sense of urgency joined with public pressure to resume operations quickly, which cyber threat actors (CTAs) are taking advantage of via higher ransom amounts.

If an organization is initially unwilling to pay the ransom, CTAs can use data leak sites to post portions of the data, attempting to increase their leverage and potentially shame the victim. CTAs might also sell or auction data if an organization does not pay the ransom. Popularized by REvil, some ransomware CTAs have engaged in targeting former victims who have already paid ransoms. In these cases, the CTAs request additional payment and threaten to publicly post the same data they allegedly deleted from the first attack after the ransom was paid. In rare cases, the CTAs will still post the data even if the ransom is paid twice.

Most ransomware infections begin through a simple initial attack vector, such as a phishing email or exploiting unsecured Remote Desktop Protocol (RDP). After initial access, cybercriminals use malware, open-source penetration testing tools, and living-off-the-land techniques to escalate privileges and move laterally across the victim’s network. The increased network access allows CTAs to target critical data for exfiltration and encryption. The typical infection process is depicted below. 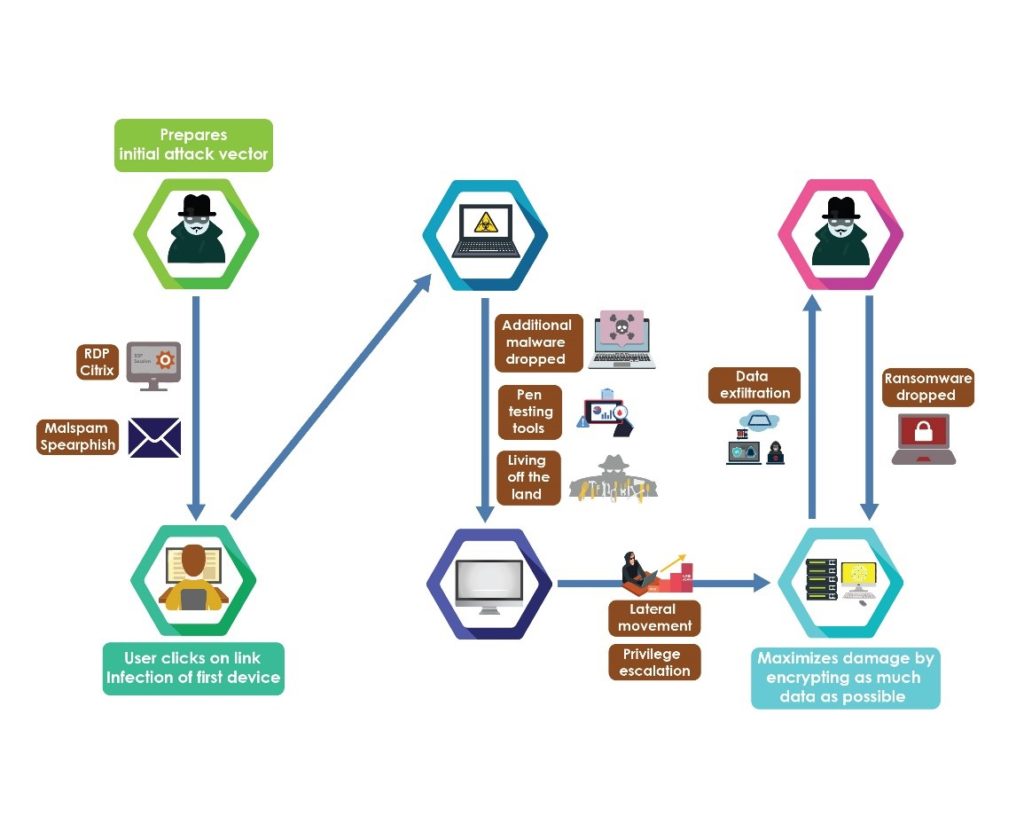 According to the MITRE ATT&CK Framework, the following techniques are used to exfiltrate data (please see the recommendations section for best practices stemming from these tactics):

The MS-ISAC does not encourage victims to pay the ransom, as it further incentivizes this criminal behavior, but understands this can sometimes be the only available option. Organizations that suffer a ransomware attack should anticipate data exfiltration occurred prior to the ransom note. The MS-ISAC recommends implementing proper data management, behavioral analytics to track access to data, and access controls, paying special attention to the most critical or sensitive data. Actions include mapping the organization’s data spread and structure, properly classifying it, encrypting known sensitive data at rest and in transit, and adhering to the principle of least privilege.

The MS-ISAC also generally encourages SLTTs to implement a defense-in-depth strategy to combat all types of malicious cyber activity, as there is no single magic bullet. Organizations should consider adhering to the CIS Controls , leveraging the CIS Benchmarks, and reviewing MS-ISAC and CISA services. In addition, the MS-ISAC urges SLTTs to reference the dual seal CISA/MS-ISAC Ransomware Guide.

5. Exfiltration Over Other Network Medium (T1011)

We would like to hear from you, please take a moment to complete this survey on this blog on Ransomware.